In 2012, I was commissioned by the United Nations Development Programme (UNDP) to customize a Diversity ArtWorks! design for their premier launch of the UNDP Diversity Awards. Ultimately, they opted for a modified hybrid of two of my existing designs as seen below the finished piece on the lower right. Within the central marquee area, UNDP will imprint the specifics of each recipient’s award.

The Diversity Awards will be given out every two years and will represent what UNDP stands for and what they are striving to achieve. They will be given in three areas: Recruitment and Staffing; Communications; and Premises Accessibility.

The Diversity Awards will recognize UNDP Offices and Units that demonstrate exemplary leadership and practice in promoting diversity in the workplace. UNDP has 173 offices in developing countries in Asia, Latin America and the Caribbean, Arab States, Africa and Europe and the Commonwealth of Independent States (Eastern Europe & Russia).

UNDP as an organization embraces inclusive employment and strives to create an enabling working environment that provides equal opportunities to women, people of different nationalities and from different geographic regions, people living with disabilities, indigenous populations and other groups.

It was a very interesting process and I was extremely honored to have been a small part of a wonderful project. 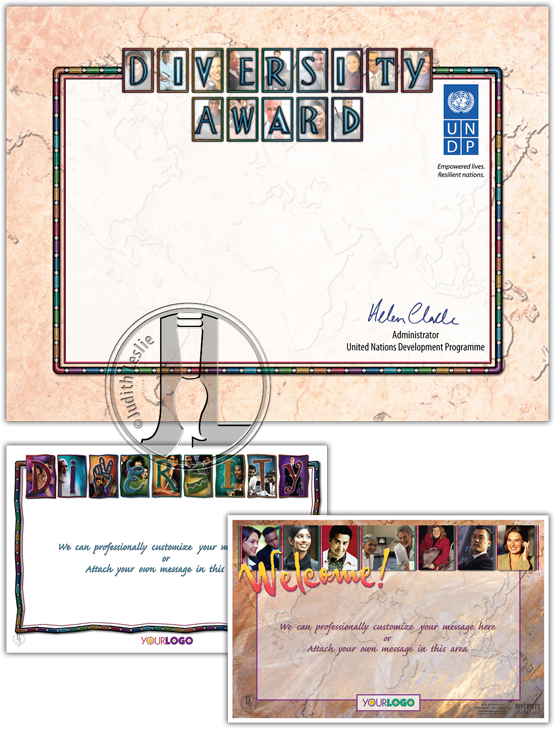 Woo-hoooo! One of my Diversity Artworks! pieces of art was published in the Diversity Resources, Inc.’s 2010 Multicultural Resource Calender™. I was exceedingly proud to have been contacted by Diversity Resources, Inc., a well-respected diversity resource company, for inclusion in their internationally-known and globally-distributed multicultural calendar. The calendar is both printed and offered electronically for web-based use in companies and corporations [via subsciption]. Here’s a snippet from Diversity Resources website regarding their calendar and the extensive information provided within:

Only our Multicultural Resource Calendar™ provides: 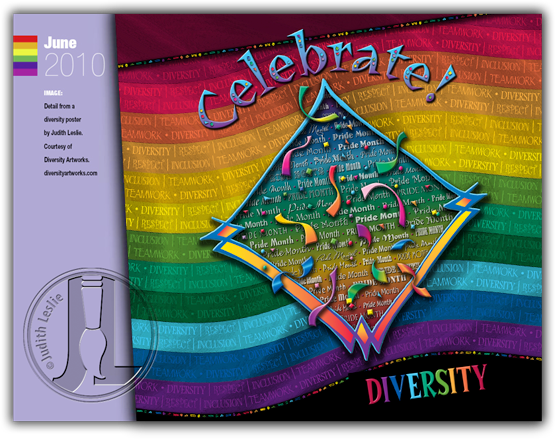 My other Diversity ArtWorks! pieces can be seen on my website at www.JudithLeslie.com.